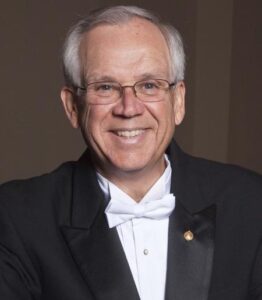 Joseph Hermann is Director of Bands Emeritus at Tennessee Technological University in Cookeville, Tennessee, where he served for 28 years. Under his leadership the Tennessee Tech Bands grew to a level of national prominence, over 25 new pieces were premiered, and the wind and percussion program became an influential force for bands in the Southeast.

Before his appointment at Tennessee Tech in 1989, Dr. Hermann was a director at the University of Arizona, Indiana University, and East Tennessee State University. His secondary school teaching includes directing the Dowling High School Band, West Des Moines, Iowa, and supervising the Des Moines Catholic Instrumental Music Program. In addition, he served briefly as the Educational Director for Bands of America and McCormick’s Enterprises, a music corporation, in Chicago, Illinois.

Dr. Hermann is sought after as a conductor, adjudicator, and speaker and has presented clinics, workshops, and has conducted in over thirty states, in Canada, and throughout Japan. His symphonic bands have been featured ensembles at state, regional and national conventions; his interpretations have been broadcast on National Public Radio, and recordings of his ensembles have been issued as reference for music educators nationwide through music publishers and on commercial labels. He is a proponent of new music for the winds, has premiered many works for band and remains an active advocate for commissioning projects.

Participation fees are $135 per student.  This fee includes all meals and hotel stay during the event.  T-shirts are an additional $15.

Attempts will be made to house “by school” when possible Communication will take place with directors once the band is selected regarding housing information.

Please use the button below to nominate your most deserving students for the All-State Band!

REMINDERS FOR SUBMITTING STUDENT APPLICATIONS
1. All Schools receive placement of their #1 ranked applicant. It is CRUCIAL that you rank only 1 student #1 Don’t play games here, just rank the one student that you feel needs to have this experience first.
2. All schools will receive a 2nd student before any school gets a 3rd student. NOTE: this may NOT be your #2 ranked student as I switch to “instrumentation needs” after placing your #1 student in the band. Often 1 or 2 sections are “full” after #1 students are placed in the band. Your second student will be based on instrumentation needs. Advice, still just submit an application for students that you think are deserving of this experience. There is NEVER a guarantee as to which sections will have needs and which will fill quickly so don’t overthink it, just submit.
3. Please only submit students who are able to attend that weekend.